ASZ architetti: Why We Do & Where We Are 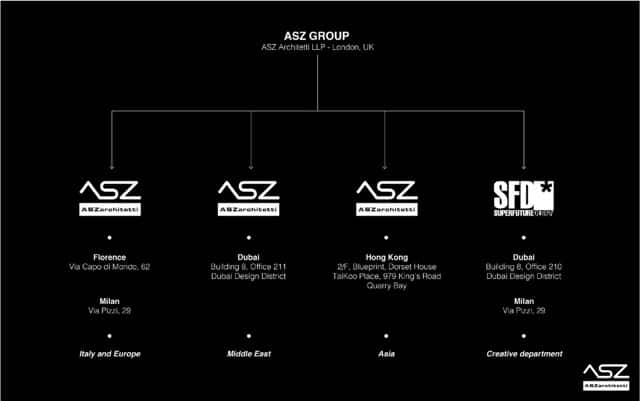 At ASZ Architetti we believe that the setting that surrounds a display has an impact on the audience and piques their interest. It also has the capacity to enhance an object or product’s aesthetic, while convincing the audience to stay longer, thereby maintaining a positive impression of the brand. But this is just a small fraction of the work we do; a large part of it is based on our vision and design philosophy.

Fulfilling A Duty to the Culture we Live in

With a comprehensive portfolio, ASZ architetti is one of the leading design practices in the region, as well as internationally. But this comes with great responsibility. As Andrea Sensoli puts it; being at the forefront of an evolving industry, we have to shoulder the task of interpreting the culture that we live in.

We often take it for granted because we don’t understand how our culture is shifting towards a different paradigm, bit by bit, every day. It doesn’t alarm most of us since we’re often too busy going about our lives to notice it, and also due to the fact that cultural aspects never just disappear all at once – they diminish slowly.

We have to preserve the greatest of these elements, and enclose them in a form that is subtle, but gives answers about the postmodern era that acted as the turning point for architecture and design.

To do so, we need to practice integrity, truthfulness, and excellence, we need to form a distinct interpretation of the things we observe around us. Just as we learn from the artists and creatives who came before us, future creatives will want to learn from us.

Envisioning a New Era in a Shifting Design Industry

Strategizing imaginative designs is one thing, executing them is another – the end product often varies from the what we initially think, which isn’t necessarily bad, so long as we follow the same creative framework.

A major part of implementing Andrea Sensoli’s eclectic philosophy in design is to set ourselves apart in a populated domain. After all, what we create today will only shape the future of architecture and design if it includes forward-thinking nuances. A critical element of our approach is also inherently passive – learning. When we aren’t designing, and even when we are, we’re constantly learning; it’s probably the biggest part of our role as designers, yet we only fulfill it behind the scenes.

A Holistic Approach, From Start to Finish

On a similar note, ASZarchitetti adopts a holistic approach towards completing projects – we deploy our own professionals and teams from the end to the beginning. When developing new space, whether it’s simply designing a retail space or creating a showroom from the ground up, we value the effect of having the brains behind the idea on-site, watching as the process unfolds.

Delegating tasks, although effective, can bear unsatisfactory results when the right tasks are delegated to the wrong people. In this scenario, we begin the process with a site dimension and condition survey, implement a procurement strategy and even obtain necessary approvals and licenses required for the project.

Starting out in Florence, Italy, in 1998, ASZ architetti has now grown to become a substantial global operation. During the first decade, together with his partners, founder Andrea Sensoli developed his architectural style to become more eclectic, representing different themes from the Florentine school, while taking certain cues from the Renaissance at the same time. It wasn’t until 2009 that ASZ architetti expanded to different continents, starting off with Dubai in the Middle East. Soon after, they set up an office in Shanghai, China. After developing an impressive clientele, the firm is now launching an office in Hong Kong and Riyadh, Saudi Arabia, while it already has resident branches in Milan and Florence. Together, the branches work in unison with a network of engineering consultants based throughout Asia, the Middle East, and Europe.